America’s 32nd Chief Executive made two trips to Honolulu in his unprecedented 12 years as President of the United States. Interestingly, the trips occurred 10 years apart almost to the day.
On July 24, 1934, Franklin Delano Roosevelt became the first sitting president to visit Hawaii. He spent the day fishing aboard the cruiser USS Houston, off the the coast of Kailua-Kona. The Houston pulled into Hilo Harbor on the 25th and visited many Big Island sites before sailing the next day for Oahu. On the morning of the 26th, he arrived at Pier 2 in Honolulu where he was greeted by more than 60,000 people. Forming the letters “F R” in the sky, 100 Army and Navy aircraft also greeted the man from Hyde Park. As he walked down the gangway with his sons at 9:15 am, the battery at Ft. Armstrong fired a 21 gun salute in his honor while the Marine band played the National Anthem. A few moments later, the president engaged in a whirlwind tour of the island of Oahu.
The presidential entourage circled the city of Honolulu before heading north on the Pali road toward Oahu’s scenic North Shore. At Schofield Barracks, Roosevelt witnessed a 15,000 troop military review, the largest ever staged in Hawaii at that time. Later that evening, he dined with Governor Poindexter at Washington Place. The next day, he visited Pearl Harbor and dedicated the new gate on the Waikiki side of Ala Moana Park. Eventually, the gate would be named Roosevelt Gate. While in Honolulu the president stayed at the Royal Hawaiian Hotel where he attended a luau. Olympic swimmer, Duke Kahanamoku, taught his sons to surf. He also spent an hour privately conversing with Harvard classmate, Walter Dillingham, at the magnate’s home, La Pietra, located near Diamond Head.
Constantly referred to as “F.R.” in the local paper, not the “F.D.R.” that many have grown accustomed, Roosevelt planted a small kukui tree outside of the Iolani Palace on the 28th before offering farewell remarks and departing the islands at a little before noon.

Radford Mobley of the Honolulu Star Bulletin wrote that the President came to Hawaii,

For more than a mere fishing expedition...Concerning Hawaii as the American outpost of the Pacific, the president is anxious to confer with the heads of the military units first hand to determine for himself the defense needs here. His visit may later lead to an increase in the size of the army and navy posts…As the time approaches for the release of the Philippines, the president desires full preparedness information regarding this bulwark in the Pacific.

By the summer of 1944, much of Mr. Mobley’s insight proved prescient.


F.D.R. spent well over 10 years in the Oval Office by July 26,1944. Still commander-in-chief when Hawaii, the “bulwark in the Pacific” was “suddenly and deliberately attacked by naval and air forces of the Empire of Japan,” Roosevelt spent the last three years leading the United States from that crippling defeat to repeated victories in Europe and in the Pacific. Now on this July 26th aboard a different cruiser, the U.S.S. Baltimore, he arrived to the fabled port in Hawaii that had become synonymous with the Alamo. There at Pearl Harbor he met with his two Pacific commanders Admiral Chester Nimitz and General Douglas MacArthur.
Although the three American leaders met briefly onboard the Baltimore, the real discussion transpired at the Waikiki home of a wealthy businessman, Christian Holmes. As in 1934, the president spent a few days touring various areas, mostly military, of Oahu. However, on the evening of the 27th he sat down in front of a large map of the Pacific in the Holmes’s mansion to discuss the way forward in Pacific operations with MacArthur, Nimitz and Chief of Staff Admiral Leahy.
Most historians probably agree that the Honolulu Conference, as it is sometimes called, served several purposes beyond simple military planning. To the president, it was an opportunity to show the country during an election year that he possessed the stamina to remain commander-in-chief for another four years at a time when his health was increasingly under scrutiny. It was also an opportunity to make an appearance with General MacArthur, the sometimes outspoken critic of the president’s policies, who purported to be a potential Republican opponent in the future. While in Honolulu, MacArthur pressured Roosevelt into accepting his plan to liberate the Philippines and thereby fulfill his promise to return to that island nation following defeat at the hands of the Japanese in 1942. He argued that the nation’s honor as well as the president’s political future was at stake.
On the 28th F.D.R. made his decision known to proceed with General MacArthur’s plan through the Philippines, while Admiral Nimitz forces continued their thrust toward the Japanese home islands via the Central Pacific. It is unclear whether the president’s decision was purely politically motivated, but it certainly didn’t hurt his election chances when the revered general heaped praises on the president’s firm control and grasp of wartime strategy.
As the U.S.S. Baltimore pulled away from the Hawaiian Islands later that day, the charismatic leader flashed his famous smile, concealing the reality of his failing health which prevented him from witnessing the fruits of that strategy. Within nine months the president would pass into eternity.
On the grounds of the Iolani Palace stands a tall kukui tree and a plaque that reads,

The tree stands as testament to the passage of time and of the momentous events that occurred in the decade between 1934 and 1944 when the Hawaiian Islands took center stage in the world’s history. 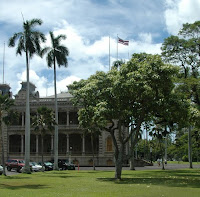 Posted by Navy History Hawaii at 9:14 AM

Enjoy the rich history of the U.S. Navy in Hawaii